We were fortunate to have 29 volunteers representing a variety of faith traditions, including Jewish and Christian, as well as representatives already working in the interfaith space (Terry Kyllo of Paths to Understanding and Kirstin Joyner of Bothell United Methodist Church) join us to create more affordable housing during this year’s Interfaith Build.

Each day began with a blessing given by Alan Bunin of the Jewish tradition. Also giving blessings/prayers were Pastor Chad Johnson of Grace Lutheran, Tamar Libicki of Congregation Beth Shalom, Terry Kyllo of Paths to Understanding and Kristin Joyner of BUMC. At lunch, we celebrated many faiths’ roles in building stronger communities.

These Interfaith Build days were a great example of what we can accomplish when we work together, and all of the participants agreed to keep the momentum going throughout the year by seeking other Interfaith activities to participate in. Joining forces with the work of Paths to Understanding, Faith Action Network and the work of BUMC will provide an avenue for deeper connection in the Interfaith space.

Join us in West Seattle for fellowship and the hands-on work of Habitat for Humanity!

Members of all faiths are welcome!

Get together with members of many faiths to respond to our regional housing crisis. We strive to be an example of what we can accomplished when we work together.

Get involved with the build

Sign up for one or more of our build days. Volunteer your time for build activities and interfaith learning while helping your community.

We are asking for groups of 5-8 people per faith tradition to make up the 25 person team each day. Volunteers must be at least 16 years old and we will provide all the tools, safety equipment, and supervision needed for the day.

We would love to have a representative on-site from different faith communities to share for 5-10 minutes each about how their faith calls them to action and service to others.

Sign up to prepare and provide a meal for the volunteers.

Provide and serve meals on-site for volunteers with enough to feed 40 people each day. We ask that food includes vegetarian options. This is a great way for youth to get involved.

Learn more at www.habitatskc.org/volunteer – use the join code Interfaith when registering.

Contact Angela Appleton, Director of Corporate and Faith Relations at angela.appleton@habitatskc.org or (206) 866-7599 to organize a group, sign up as an individual, or if you have questions. Space is limited.

Aaron Wright, evening anchor and reporter at KIRO7 News, will emcee this year’s Beyond the Build luncheon on Thursday, June 2 at the Washington State Convention Center.  No stranger to Habitat for Humanity, Aaron volunteered with the Rockford, Illinois chapter during his first TV news position upon graduating from Hampton University.

Since then, Aaron’s journalism credentials include an Emmy he earned for best evening newscast in San Antonio, Texas, where his news coverage included the deadly Gatlinburg Wildfires of 2016.  His reporting consistently leans toward service to the people in his stories. Aaron’s takeaway from covering those fires is, “People lost a lot, but we were able to get out and show the reality of what they were going through and help the community by making sure they weren’t forgotten when the fires were over.”

Aaron’s attitude toward service as the foundation of his work makes him a perfect emcee for Beyond the Build 2022. Aaron believes journalism is service and, at its best, it uplifts the community, exposes corruption, and helps people in need. It’s that attention to people in need that inspired Aaron to jump at the chance to emcee Habitat’s biggest fundraiser of the year.  Aaron has worked at two TV stations that sent volunteer teams to Habitat builds, and he was impressed by the outcomes. “When I think about Habitat, I think about seeing families walk through their new homes for the first time. The joy they show is like no other.”

Newly arrived in Seattle, Aaron’s journalism career has taken him from his home in Spartanburg, South Carolina to Rockford, Illinois, San Antonio, Texas and Knoxville, Tennessee. He’s happy to be here in Seattle working with “…a team that takes news seriously.” He enjoys sharing the city’s great parks and the region’s hiking trails with his wife and two daughters.  Of course, there is the seafood, “Between oysters, clams, crab, and salmon I am in heaven here.”

In keeping with his joy of service, Aaron is passionate about children of color learning to swim, “Black kids drown at a really high rate compared to others.” His first job as a YMCA lifeguard showed him the value of water skills in saving lives. He also supports animal adoption because he’s seen “… how much they (rescued pets) can help an owner live a really full life, while saving theirs.”

The bottom line for Aaron Wright is community connection and storytelling.  He’s sure to bring that spirit to his emcee duties on June 2 and his partnership at the head table with keynote speaker Nomadland: Surviving America in the 21st Century author Jessica Bruder. If you haven’t registered yet, there’s still time – please do so here: Beyond the Build Luncheon Habitat SKC. We hope to see you there! 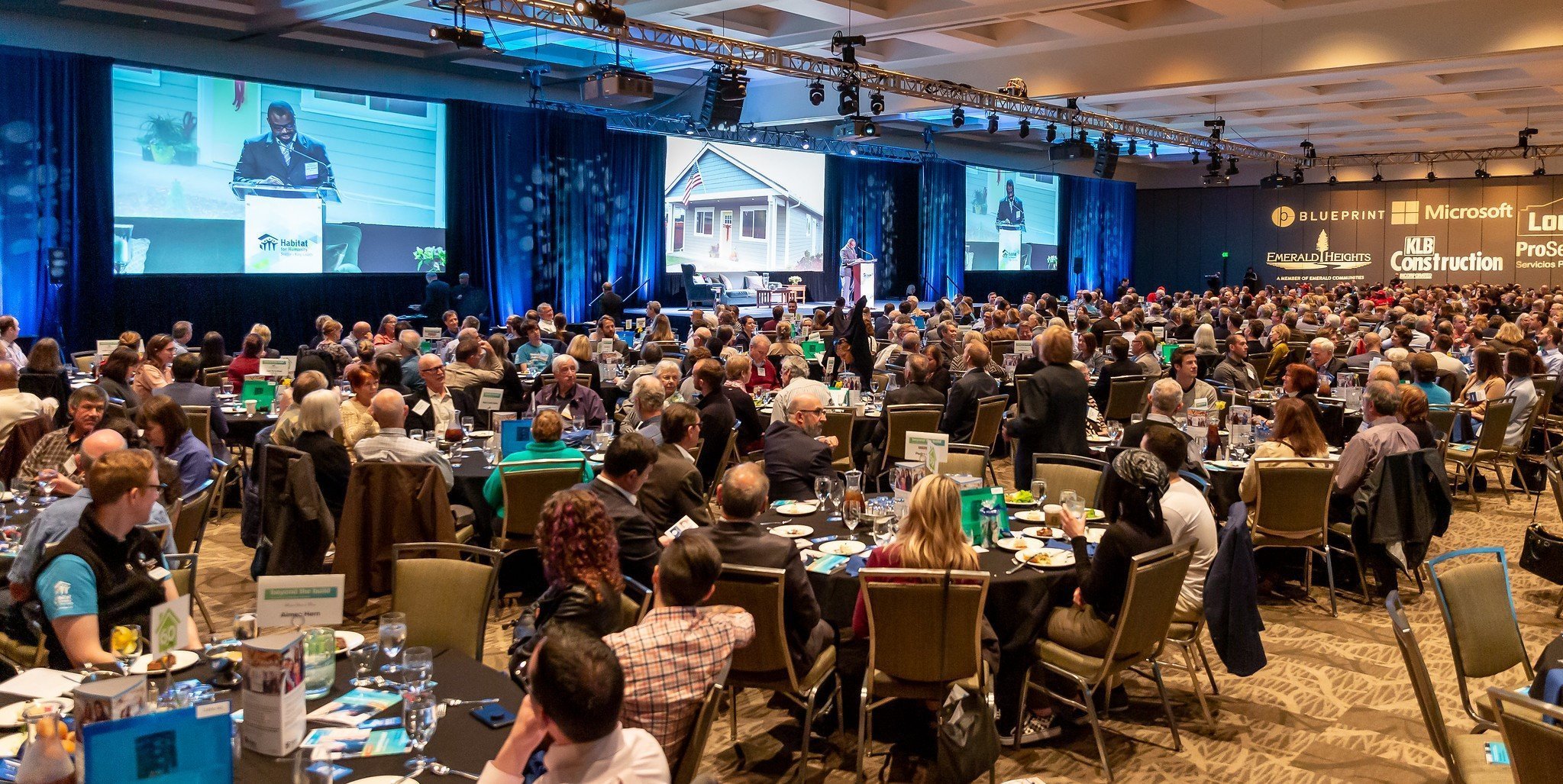 Beyond the Build Luncheon 2022

Mark your calendars for our annual Beyond the Build Luncheon!

Join us as we gather at our luncheon on Thursday, June 2nd, 2022, where we’ll celebrate accomplishments, look to the work ahead, and honor longtime supporters.

As more families in Seattle struggle to keep a roof over their heads, Habitat and our supporters step up to provide safe and affordable housing to those who need it most.

Women Build is a community of Seattle-King County women and organizations coming together to empower one another, make an impact, and change lives. The women of King County fund projects, build homes, and revitalize neighborhoods working side-by-side with our homeowners and volunteers.

We are excited to announce our schedule of events for this year’s Women Build. We hope you will join us for one or more of our events! Thank you all for stepping up to empower women and build an affordable future for families in King County!

Check out all the photos from the event here